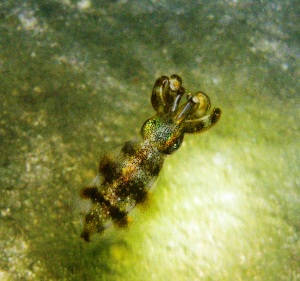 Bin Fin Reef Squid tend to dwell in tropical, saltwater and marine habitats; especially in warm coastal waters of 16°C – 34°C. They will surface to shallower waters during the night due to being less detected by predators.
APPEARANCE

The Big Fin Reef Squid have the body form of a characteristic cephalopod; this consists of a large mantle, attached head and long arms. The eponymous “big fins” are located on the superior portion of the mantle. The species fins account for 90% of the total body length, giving the Big Fin Reef Squid’s oval shape.

Characteristic of most cephalopods, big fin reef squid use pigmented skin cells, to change colour/pattern to camouflage. Other than this, some specific patterns and colours are utilised by males and females during mating to attract one another. Additionally, when threatened, Big Fin Reef Squid produce a jet of ink to ward off predators.

Big fin reef squid lay eggs all year around. Females can release from 20 to 1180 eggs each, in egg capsules that contain around 13 eggs each. Eggs are laid in single strands on mainly rocks and corals. Once the female lays her eggs, her body deteriorates and will typically die before she can reproduce again. However, the male can mate with several more females before he dies.

The Big Fin Reef Squid is not currently listed as being either threatened or endangered, however it has been predicted that it could become threatened soon.

This species is thought to be one of the most economically significant species of squid; they are fished all year round in large quantities for human food consumption, especially in Asia.

** This data set was written by Clem Carroll of Bournemouth University, England and edited by Stephanie Young**