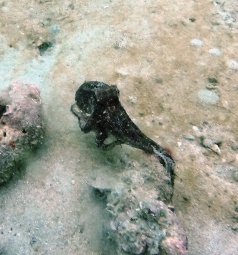 Coconut octopuses are found in warm, tropical waters across the Indo-Pacific sea in Asia. They are benthic, meaning they typically reside on muddy or sandy sea beds and have been seen in shallow waters to depths of 600 feet. They hide inside empty clam shells, inside empty coconuts or bury themselves in the sand with just their eyes showing, sometimes you can tease them out with your hand allowing them to suction their tentacles to your fingers.

Coconut Octopus have dark markings stretching across their skin and extremely bright suckers. Each of the eight tentacles is very wide for catching prey, and has a sharp beak for eating shrimp, fish and crustaceans. Compared to others, the coconut octopus is fairly small and juveniles exist in planktonic form.

Coconut octopus have a remarkable behaviour in this species is tool use; they have been observed using coconut shells and large clams as a protection against predation by hiding in them and ‘walking’ across the sea floor, like a floating coconut. They are also only known to hunt at dawn and dusk, using their tentacles to reach into crevices and grab prey.

After fertilization, the coconut octopus females can lay up to 100,000 eggs (Featured picture) and, unlike other octopi who then die, the coconut octopus will protect the eggs throughout the entire gestation period. Once the eggs hatch, the offspring remain planktonic until adulthood and carried to new areas by ocean currents.

The coconut octopus is an important predator and keeps levels of it’s prey species (fish, crustaceans and shrimp) healthy in its habitat. It can also be predated upon by larger octopuses, big fish and many shark species, making them an important population regulator and food source. They are used in recent research to study their brain function of tool use. They are a popular food in most Asian cuisine too.

The main impact on coconut octopus is fishing; trawling nets collect everything and also destroy the substrate and collect many individuals that they would usual. Pollution is also another huge impact on marine species, toxifying the water which can cause mutations during their incubation period.

The coconut octopus’ brain to body ratio is similar to birds and mammals, and is the only invertebrate known to use tools!

** This data set was written by David Stanley of Bournemouth University, England and edited by Stephanie Young**